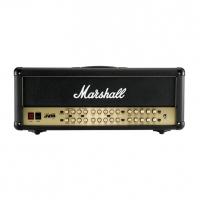 Satriani and Marshall tweaked a classic to create a new generation of tone.

The Marshall JVM410H Joe Satriani Edition head is an addition to the Marshall Signature Series. Marshall’s R&D engineers worked vefry closely with Satriani to craft the JVM410HJS. After much experimentation and an assortment of trials that involved Satriani using prototypes during recording and touring, they signed off on the final version and the JVM410HJS went into production.

The most notable difference from the original JVM410 is that the reverb pots have been replaced with four nose gates, one for each channel, and each with their own threshold. A Mid Shift button has been added and can be used with both the OD1 and OD2 channels.

The Clean channel is based on the 6100 when on the green mode, with the orange and red modes being hotter variations. The Crunch channel takes the original JVM410 crunch and adds some of the popular Marshall “AFD” circuit to it. The OD channels are voiced identically, based on the JVM410 OD1 but with the gain scaled back slightly and a smoother transition between modes. The Mid Shift button determines the difference in mid character between the original JVM410 OD1 and OD2 tone, moving the mids from around 650khz (Mid Shift off) to around 500khz (Mid Shift on).

The JVM410HJS is powered by EL34 tubes and has two Master volumes, the supplied footswitch allows you to switch between Channels, Modes, Master Volumes, FX loop and now the Noise Gates and Mid Shift as well. There is also a full MIDI implementation.